Meet Me At Kentucky and Sierra

When I was trying to get the final word on when my apartment building was constructed, I found that prior to 1891, I couldn’t find any house numbers on Tennessee, and nearby buildings were addressed in relation to Sierra and Nevada. 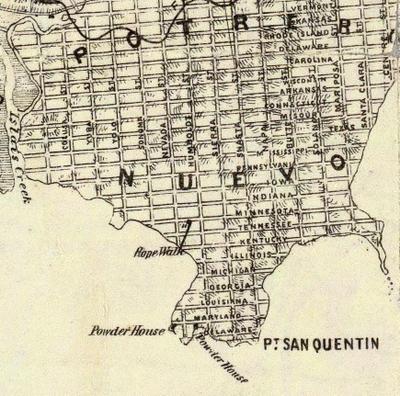 After hours of bleary-eyed paging through scans of city directories and maps from the late 19th and early 20th centuries, I came up with the following list of mappings:

Interestingly, in 1909, many San Francisco streets got changed from numbers to various other things. Burrito Justice has that story.

In any case, I think that in 1886, a “Catherine Sullivan” was living in my building or a building next door. Since a “Thomas Sullivan” built this set of three, that implies that my apartment is from 1886 or 1887.

This was written by Jesse Mullan. Posted on Sunday, November 20, 2011, at 4:13 am. Filed under Dogpatch. Bookmark the permalink. Follow comments here with the RSS feed. Post a comment or leave a trackback.