From the Mouths of Babes

The San Francisco Call was an iteration of the older San Francisco newspaper “The Morning Call.” It was bought and sold a few times and eventually disappeared into the San Francisco Examiner. Said newspaper featured a weekly kid’s section (sometimes called the Junior Call) with an execrable comic Alonzo featuring an eponymous misshapen dog. A nearly nonsensical local comic with shaky plots and questionable continuity? Be still my beating heart! 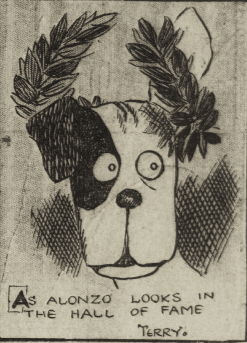 Our new canine hero aside, I feel that I must draw your attention to the editorial from an unknown junior editor from the Irving M. Scott school. In it, he wisely advocates for a tunnel through Scotch hill. He is, of course, referring to Potrero Hill, and he refers to what we might call the Dogpatch as simply Potrero. Interestingly (or appallingly), there is no mention of the word Dogpatch in the Library of Congress’s entire scanned newspaper collection, years 1836 to 1922.

A Plea From the Editor

The Potrero is by far the land of opportunity in San Francisco. It is not only a very beautiful residence site, which, in fact, is the very best in San Francisco, but also a very promising business section. When once the opportunities of the Potrero are developed, then this part of San Francisco will be the most important section of the city. From the bottom of Scotch hill straight to the top of it are stretched many beautiful residences. This hill is selected for the homes of our people because of the beautiful view one can obtain from it. From the top,of this hill you can see straight from the extreme southern end of the Mission to the ferry building and the bay. This includes the business section, the residence section and the manufacturing section of the city. I will now deal with our manufacturing part of the Potrero. Along the bay and the interior are stretched the many workshops of San Francisco. This district contains most of them. Of the many, there are the Southern Pacific and Santa Fe railroad yards, the oil docks, lumber yards, the Union Iron works, the United Steel corporation, the Gas and Electric plant, the yeast factory and other places. Although the manufacturing spaces of the Potrero are rapidly filling up, there are still some places left. Islais creek, to the south of us, is being fixed for docking facilities. The harbor commissioners have recognized the value of this creek and have said it ought to be fixed; but the work is progressing slowly, and it ought to be attended to. But our greatest need is that a tunnel be put through Scotch hill in the vicinity of Twentieth or Twenty-second street. The supervisors of San Francisco ought to look into this matter. Although it would cost quite a sum of money, it would be a great help to us. It would also be a great help to the working men who come from the Mission. It would afford a quick way of getting to and from the Mission and the Potrero, so that the men coming over here in the morning would not have to leave their homes so early. The people from the Mission have gone with us to the supervisors when we urged it, but we were always turned down. Now that the city is putting tunnels through certain districts, we only hope that Mayor Rolph will see the necessity and the great help a tunnel would be to us.

This was written by Jesse Mullan. Posted on Saturday, February 4, 2012, at 12:53 pm. Filed under Dogpatch, History, Alonzo. Bookmark the permalink. Follow comments here with the RSS feed. Post a comment or leave a trackback.