Dogpatch has been waiting a year — make that a century and a half — for its first museum, and we are finally on the map. The Museum of Craft and Design had its grand opening this weekend, with a cupcake truck, hot dog stand, bahn mi sandwiches*, and works from three talented contemporary artists. As such, the museum space was crowded and noisy on Saturday. Patrons swarmed amidst the work exitedly. Their conversations echoed to deafening extent — a situation not helped by the DJ spinning in a corner.

But the work! “Creatures from the Deep” by Arline Fisch is lovely and exciting. Unfortunately, having the jellyfish cordoned off in a single space reduced their three dimensionality — they would have been well served to be installed at multiple heights in individually navigable groups.

“Accomodation” by Rebecca Hutchinson is an installation constructed in-place. The sculptural work was beautiful and seemed to be organic and alive, but also suffered from feeling pressed into a corner.

The real star of the show was “A Sculptural Odyssey, 1968-2011” by Michael Cooper, being a stunning exploration of the fetishization of machine — automotive forms reinterpreted into abstractions, surreal larger-than-life handguns, and impossible chairs and conveyances that seem all-but-real. The artist’s work is simultaneously grotesque and sublime: perfectly expressed three dimensional collages. 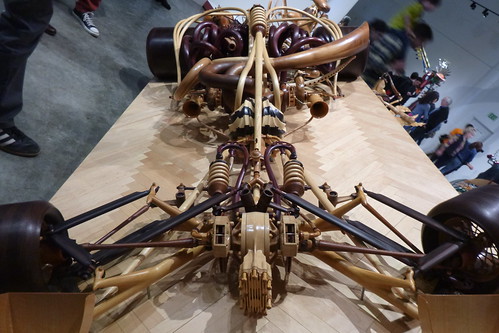 If you miss the free admission this weekend, the regular admission is $8 — but it might be worth it just to avoid having to wade through intense crowds. Then again, with such strong work, there is a chance that they will be mobbed every weekend. This museum could be the new anchor for the neighborhood.

So, what night is the Dogpatch Art Walk (Dogpatch Art Bark?) each month? Are there enough galleries, studios, and museum to make that work?

This was written by Jesse Mullan. Posted on Sunday, April 7, 2013, at 5:16 pm. Filed under Dogpatch, Art. Bookmark the permalink. Follow comments here with the RSS feed. Post a comment or leave a trackback.