Portland’s Enormous New Industrial Shipyard Is Bigger Than Ours

The other day I was corresponding with former Potrero View publisher Lenny Anderson and he mentioned that the Portland shipyard run by Vigor Industrial had “just lifted the first ship in its brand new 960′ dry-dock…said to now be the largest in N. America!”

Grim news for a neighborhood so proud of BAE’s formerly largest floating drydock on the West Coast: we’ve been emasculated! 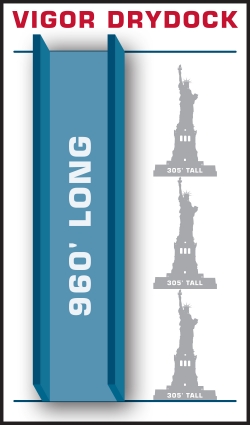 But wait, if you look at the incomplete list of drydocks on Wikipedia, you can see that the Newport News Drydock #12 is clearly the largest drydock in North America, at 675 meters. Following that is Baltimore, Victoria (Canada!), Marinette Wisconin (on Lake Michigan!), Boston, another at Newport News, Brooklyn, two in Philadelphia, Pearl Harbor, Panama, the Bahamas, San Diego, another in the Bahamas, ANOTHER one in Philadelphia, and YET ANOTHER at Newport News.

Finally, we get to the Vigorous, which technically is the largest floating drydock in the country, followed by our drydock, literally called “Drydock #2”. Oh, Baltimore has a bigger floating drydock than us — but they are on the East Coast and, given the second season of the Wire, probably totally mobbed up. 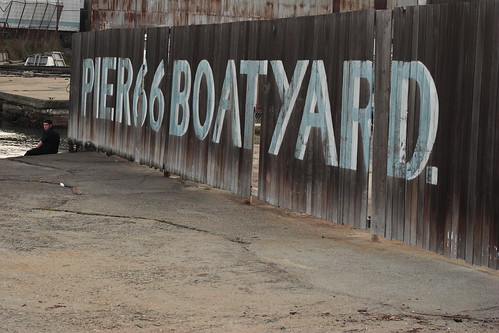 A floating drydock is like a ship that opens at one end and can be partially sunk and then raised back up with another ship inside of it. A graving drydock is basically just a big hole into which a ship can be piloted and out of which all of the water can be pumped — and yes, graving refers to a grave. I asked Caitlin Sause of Vigor if she could explain why a floating drydock would be preferable.

There are pros and cons for both types of docks; however some of the advantages we see with a floating drydock are: 1. vessels can be transferred to/from shore easily 2. The dock can be operated with trim/list, thus reducing block loads and eliminate vessel stability problems and 3. a steel dock can be easily lengthened/modified to accommodate specific projects.

The first and third points are pretty clear, but the middle one might bear a little explaining. A boat or ship usually has a V-shaped bottom. A shipyard must place appropriate blocks under the ship before pumping out water. With a floating dry dock, you could angle the whole thing to one side (list) or end to end (trim) to get the blocks evenly under the ship. 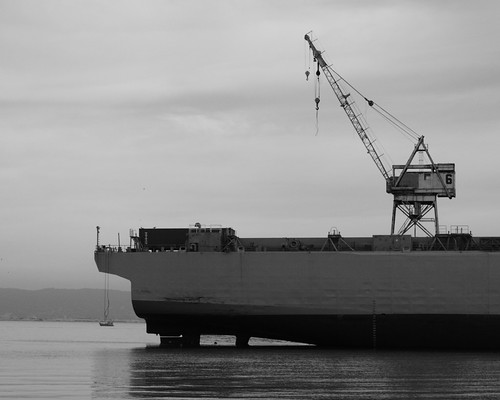 Our dock comes in behind the Vigorous, but we’ve got nothing to be ashamed of*. We’re now the second largest drydock on the west coast. It’s above average in length! Anyway, it’s not the size of the dock that matters, it’s how the shipyard scrapes the barnacles.

I sent an email over to BAE. Dennis Deisinger, Dir. Business Development, who admitted that the Vigorous was definitely in competition with our old Number Two.

We do appreciate the support you ‘Dogpatch-ians’ give the yard. The daily whistles and changing view with each ship that comes by is definitely a part of the neighborhood.

Ain’t nothin’ wrong with tootin’ your own horn, but I could swear that I have heard tell of newly arrived neighbors breaking in and stealing the 150 pound whistle from the shipyard.

If you believe the PR speak, Vigorous could invigorate the whole US business of shipbuilding.

The arrival of the Vigorous opens the entire west coast up to new customers and more work across all shipyards. Maritime is considered to be an old industry, but we are evolving and revitalizing. Our vision is to prove that America is not a “post-industrial nation,” by building a US-based industrial business that doesn’t merely survive, but thrives. We are looking to provide stable, long-term, family-wage careers for the skilled artisans who build things with their hands. There’s tremendous opportunity ahead and we are working hard to keep those family wage industrial jobs here on the west coast. 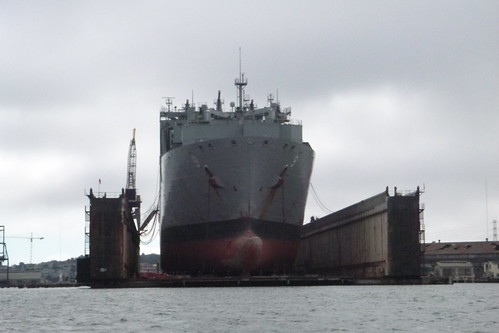 Awesome! Oh, wait, wasn’t that the drydock that had a body trapped under it?

It’s not clear if they actually recovered and identified the body. Sometimes I think that they should just go ahead and film a season of the Wire in San Francisco.

There are some nice photos of the drydocks on the Pier 70 SF phototour.
http://www.pier70sf.org/phototour/phototour_drydocks.html

Don’t forget that the Third Rail used to be Tom’s Drydock, and I wrote a brief article about it: Tom’s Dry Dock

The Mitsubishi Heavy Industries Nagasaki Shipyard & Machinery Works has a 990 meter drydock. You can pretty much see it from space.
I’m not saying that I have drydock envy. (maybe I am)

Here’s a video that I filmed while kayaking near the drydock on Pier 70s dime:

On the other hand, here’s a robot painting a ship in our shipyard, with a suitable soundtrack:
CHARIOT ROBOTICS CARNIVAL SPLENDOR BAE SAN FRANCISCO

Time lapse of the SS Jeremiah O’Brien’s arrival at dry dock on January 24, 2012

If you made it this far, you might enjoy this 1981 Report on Survey of U.S. Shipbuilding and Repair Facilities.

* I can’t seem to find a resolution to this lawsuit, the allegations of which are upsetting:
Black Workers From Bay Area Shipyard Allegedly Called ‘Aunt Jemima,’ N-Word Refuse Cash Settlement Requiring Silence

This was written by Jesse Mullan. Posted on Wednesday, December 17, 2014, at 8:30 am. Filed under Dogpatch. Tagged drydock. Bookmark the permalink. Follow comments here with the RSS feed. Post a comment or leave a trackback.